What to See in Los Angeles

When it comes what to see in Los Angeles, as a tour company we know the answers. This is a long post comprised of all our other posts into possibly the biggest knowledge base on sightseeing in Los Angeles.

Beverly Hills & Hollywood are part of our Grand Los Angeles Tour. In Beverly Hills you see Rodeo Drive where the richest and most famous celebrities come to shop. A great sight is the Beverly Hills Sign, which has a pool of water and a giant tree that has provided shade for hundreds of thousands of people.

As you continue to explore Beverly Hills you see different areas where parts of movies or TV shows were made. We see the hotel where Pretty Woman was made among other locations where movies were made on our LA Tour.

Hotel Where Pretty Woman Was Made

A picture with the rodeo drive sign in Beverly Hills is certainly Instagram-worthy. Our tourists had that same exact idea and asked us to take the picture for them.

The Disney Concert Hall is just one of our stops. We also go to the Hollywood Walk of Fame, which on the Walk of Fame is the magnificent Madame Tussauds Wax Museum with Marilyn Monroe’s wax statue for you to walk by and take a look at. 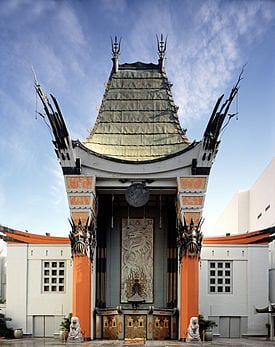 While you may think that only Hollywood celebrities live in Los Angeles, you are wrong. Joey Graceffa and Colleen Berringer from Miranda Sings is just one YouTube couple in Los Angeles. Safiya who runs her awesome makeup channel also lives in or around Los Angeles. Tana Mongeau used to live inside LA and still comes back here often. Our tourists once saw her pull up next to our tour bus.

Our tourists who book a grand Los Angeles Tour or Afternoon Tour love the Hollywood Walk of Fame, as you can see below. Whether you love sightseeing or want a picture with a certain Walk of Fame star, this is one awesome stop on our tours.

We also stop at the Disney Concert Hall, which the philharmonic performs at among many other amazing groups.

If you’ve ever watched the movie Pretty Woman, you’ll love seeing the hotel that was used in Pretty Woman in real life. The area where the hotel scene was made is near Rodeo Drive. Beverly Hills is an area where we have seen celebrities out shopping where the ritzy stores like Michael Kors, Prada, and Gucci are.

This is an iconic building with an amazing architectural design on the Hollywood Walk of Fame.

Our tourists who book a Grand Los Angeles Tour or Afternoon Tour love the Hollywood Walk of Fame, as you can see below. Whether you love sightseeing or want a picture with a certain Walk of Fame star, this is one awesome stop on our tours.

The history of Griffith Observatory started in the mid 1800s when Colonel Griffith J. Griffith went to Mt. Wilson Observatory that at the time had the worlds most powerful telescope. He looked through the telescope, and decided “If all mankind could look through that telescope, it would revolutionize the world”.

Griffith J. Griffith was set on building an observatory, so he spoke to the brightest minds on the subject and then he started a fund for it. He died in 1919, but the Griffith Trust Committee kept collecting money for the telescope of Colonel Griffith’s dreams. His will stated that a telescope was to be built that was 12 inches in diameter. In 1931 the Griffith Trust Committee had enough money to get a 12 inch lens from the Carl Zeiss company located in Germany. They built refracting telescope and brought  Colonel Griffith’s dreams into reality.

The telescope was assembled and had a grand opening May 14, 1935. Unfortunately, May 14th was cloudy, so people came back May 17th on a clear night to look through the telescope so they could see the amazing cosmos. People still line up at night for over half an hour to look through the same magnificent telescope of Colonel Griffith’s dreams. It is truly an amazing sight to behold.

10 best sightseeing places to take a selfie in Los Angeles Tour for Instagram spots is hand-curated.

Our list for the 10 best Los Angeles tour selfies for Instagram are ranked by how well they did on Instagram with likes and views. We also rank by how awesome of a time you will have at each sightseeing destination.

While this is a bit different than discussing Hollywood, Beverly Hills, or Griffith Park, this is an important part of our list on where you can take the best Los Angeles sightseeing selfies, especially when you are on a tour.

This is a great place to pick the Walk of Fame star you want a picture with and take it. This is a place that is selfie gold on Instagram.

If you love the LA Kings, this is a great selfie location that will get you plenty of likes on Instagram as well.

The Santa Monica beach is an amazing sight and great for sightseeing; however, it is not offered on our Grand Tour or Afternoon Tour. If you order a private tour by calling us, then we may be able to go there.

This is yet another great selfie location as this family from New York certainly thought. This list and this post will continue to grow with amazing locations in Los Angeles.

Disclaimer: We may not do everything listed above. We are going over each area of Los Angeles. While we do go to the majority of it, please remember this is a guide of awesome Los Angeles places, not a list of our stops for our Los Angeles Tours.